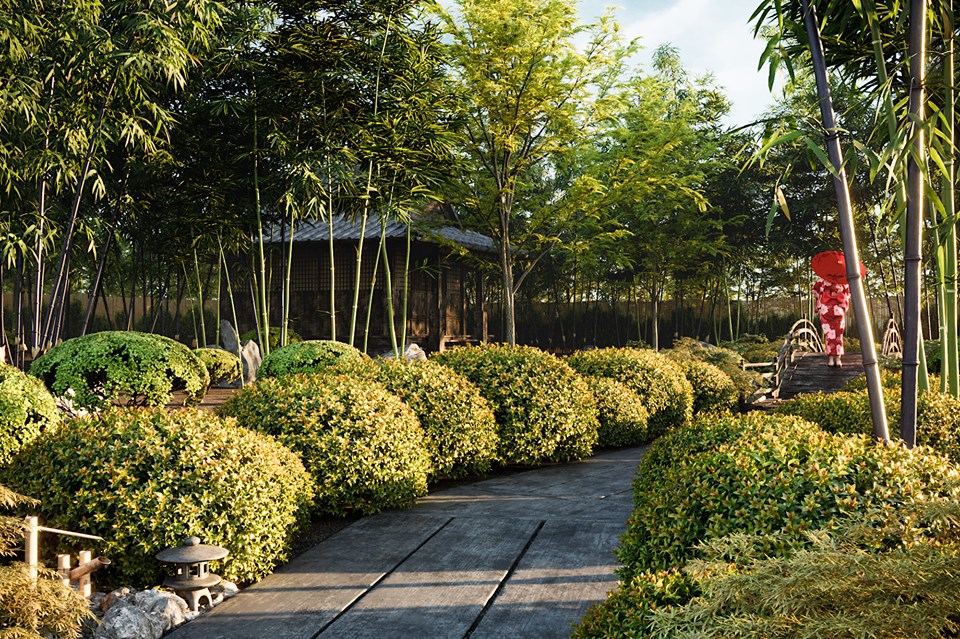 There are certain composition rules in architectural render, such as focus, hierarchy, scale and others. What are the basic arrangement’s principles of scanned models in 3d scene? So, this article suggests paying attention to some key points and errors.

Before placing 3d scanned model within the finished architectural scene, it is essential to determine the elements that one wants to appear significant to their viewer. Correct focus and accurate emphasis guarantee a successful composition. As a result, the viewer will pay attention to the elements that a 3D archvizer considers important. Focus creates clear communication with the future audience of the image. In such a case, 3d scanned model serves as an excellent pointer.

It is important to build a correct hierarchy of the scene. First, it is worth to determine which elements are important to emphasize within the scene. It is good to place largest and most colorful 3d persons next to them. By highlighting important objects through the size and the brightness of the characters, it is possible to direct the viewer’s gaze towards a desired element. Also it is a way to narrate a story, giving a flat 3d scene depth and expressiveness.

The scale is important not only for the hierarchy. Likewise, it helps to evaluate the proportions. If it is crucial to underline the size of an element. It’s easy to do by placing a 3d human model next to it. At a subconscious level, a viewer shall mark the specific size of an object or a building.

In interior 3d scenes, intentional asymmetry attracts the eye, which gives a 3d picture an air of dynamic action and force. So, to create such a balance, it is good to distribute the visual weight in 3d space evenly. However, within the picture each figure should perform a certain function and be in-line with the general concept. In a correct composition, a chaotic arrangement of 3d figure models is unacceptable. So, the greater the number of objects used, the clearer the role of each one should be.

It is important to leave some vacant space; it helps the composition to “breathe”. The more empty space around is left, the more attention 3d people will attract.

Once there is a vacant space, even the scene loaded with architectural details will become more appealing. Each element will emerge as distinguishable. If there is no other way to add enough “negative space”, it is advisable to slightly reduce the scale of the scene. Therefore, adding neutral elements  such as a clear sky, parts of a deserted street and etc. After a placement of 3d person has been completed, it is time to evaluate the result. Namely, to check whether 3d character add desirable volume and emphasis for the details of 3d design.

Examples of the scenes, containing 3d persons:  tips and mistakes

1. When 3d models are placed at an equal distance from the viewer – moreover, evenly distributed by similar groups – the picture will be unexpressive and blatantly flat. Scanned models in 3d scene will look like a wallpaper pattern.

At the same time, if 3d people are put at varying distances from a viewer, in an uneven order, they will not only look better themselves. They will also perfectly emphasize a visual rhythm of a building.

2. 3d people models are often placed along the axes of a building or its elements. Instinctively,  our mind desires to anchor a model to some point. One should pay special attention to such placement and avoid it. Otherwise, the scene will appear plainly artificial and inanimate.

By positioning 3d model in places of a desired focus, one can emphasize the unique features of an architecture.

3. If the building itself is placed in perspective, while 3d persons are put in a single line, the visual impact of the architectural model will be lost. In an arrangement like this, the building turns flat, and the 3d scene becomes shallow. But if 3d person model is positioned dynamically, following the laws of perspective, it will emphasize the volume and enliven the image.

3d people model – is not just an way to breathe some life into otherwise a desert-like landscape. They are an extra helpful tool of any architectural designer. Their skillful use enables the designer to guide an eye and conduct a silent dialogue with the viewer. In short, the models aid to share the merits of a particular element or a structure as a whole. In the best way possible.

The use of well-designed, high-quality 3d model will help to add aesthetic weight and increase the price of a final product. It allow to emphasize the skill, meticulous approach and professional attitude. Having mastered the art of composition using 3d figure model, a 3d archvizer will certainly rise to a higher skill level.